Covered up in rhubarb at the moment.

This cake is so good. I halved the recipe so it would fit in an eight inch cake pan. I also added a half teaspoon baking powder.

Place oats, flour, brown sugar and salt in melted butter and mix. Stir until clumps form. Set aside 1/2 cup of the crumble mixture. Press the rest of the crumb mixture evenly in the bottom of the pan.

Spread the diced fruit over the crust. Sprinkle it evenly with lemon juice, and then the splenda. Scatter reserved crumb topping over fruit and bake 40 minutes.

Let cool in pan and serve warm with cool whip, if desired. Store leftovers in fridge.

Spring is certainly here. A crab apple in bloom.

Our first harvest of the season is rhubarb. I made jam today. 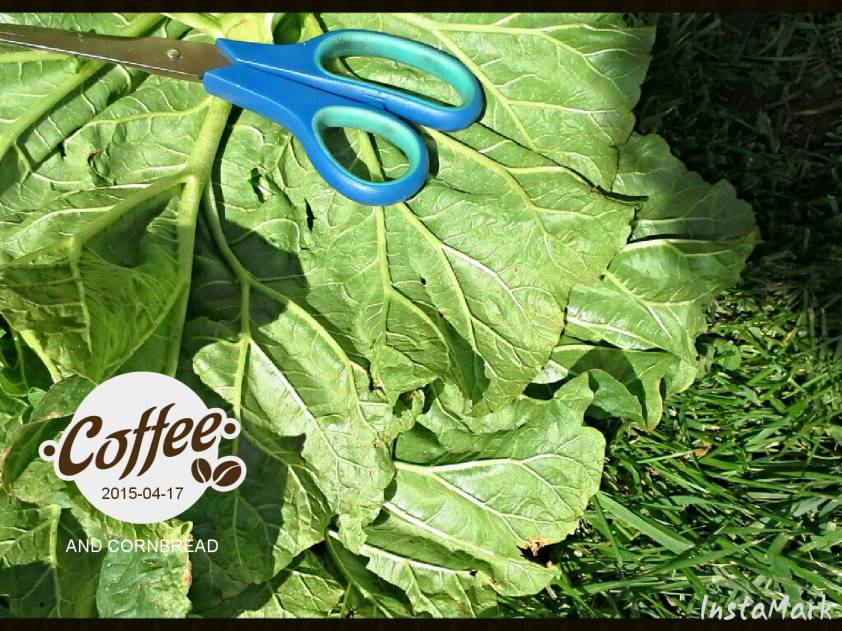 This plant is so large and beautiful.

Of course you don’t use the leaves because they are poisonous. Stalks only.

This recipe only makes a small batch. I plan to make two small batches this season. Another later in the season. 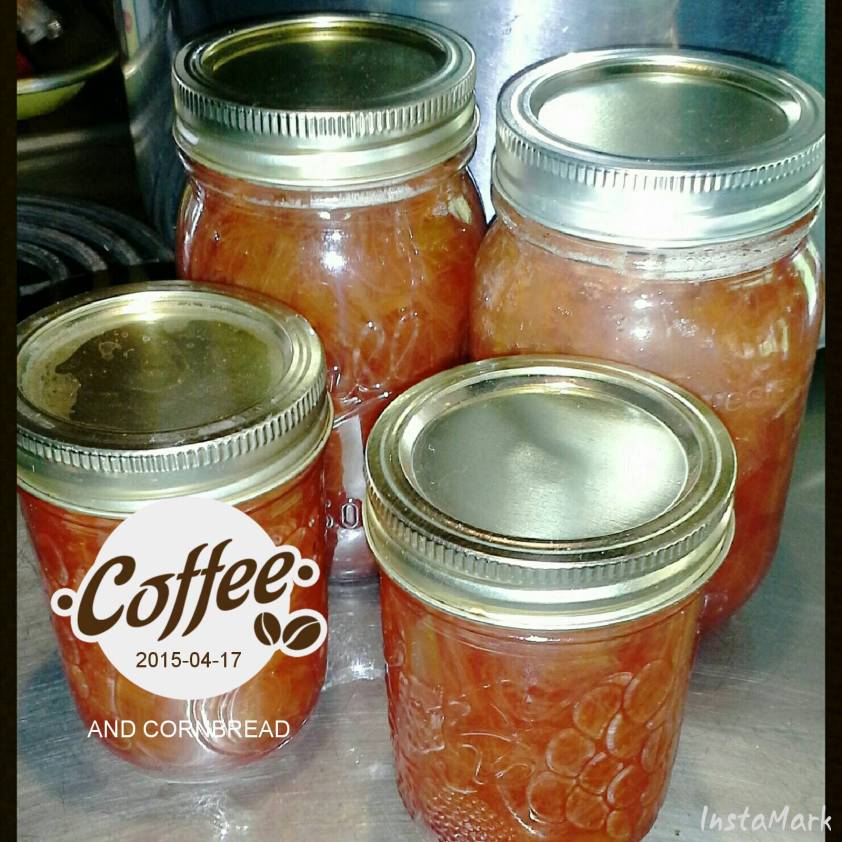 With only two of us we don’t need more than that. With the plum, blackberry, crabapple, and grape we hope to harvest we should be covered up in jam. The Lord willing.

Of course there will be plenty of rhubarb for pies, cakes, cookies and breads.

We harvest rhubarb from early spring until the first week in July.

I got this recipe from Just a Pinch and it turned out perfectly. It is just as the name states, “easy” . I have only used the unflavored gelatin but the flavored could also be nice.

Directions Step-By-Step 1 Cook rhubarb and water until tender,add sugar and lemon juice and stir together well. Cook over medium-high heat for 10 minutes or until you reach a boil that can not be stirred down. Add Jello and stir until dissolved. Bring to a boil for 2 minutes. Fill sterilized hot jars to 1/4 inch from rim of jars. Remove bubbles, wipe jar rims with hot damp cloth. Seal in jars to fingertip tight. Put in boiling bath canner with lid on for 15 minutes. Remove lid from canner, let sit 5 minutes. Remove jars from canner to a towel lined counter to sit and cool for 24 hours before storing. 2 **** if you need a little water, don’t be afraid to add it while cooking down the rhubarb… but go sparingly as the rhubarb creates liquid..

We are having some problems with one of our ponds. One flow way has a hole in it and dear hubby is here trying to get it fixed.

The way it all works is the drain way from the upper pond flows into the lower pond through this spillway.

The lower pond spills into the pipe we are having problems with and then runs under our drive and into the creek.

We believe he has it fixed, but we must get some rain to allow the lower pond to fill back up to really see.

What does a working man need to get his day going but a “Garden” omelet with home fries. 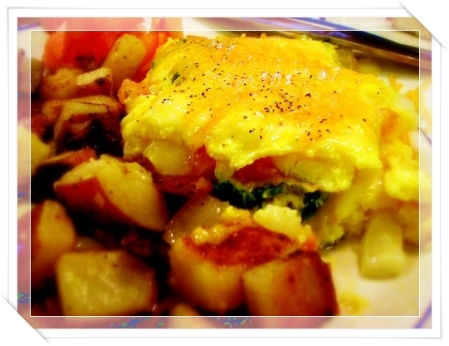 Just gather whatever may be in the garden. This one has onions, spinach, some freezer tomatoes (from the garden just delayed a bit), and Mexican tarragon.

Place it all inside a pool of beaten eggs in a greased fry pan.
Fold when it becomes firm. Add some cheese on top.
Fry some potatoes to complete and feed your hungry man before a hard days work.

Now I have a question. This is my first year trying to grow rhubarb. Just look at these leaves. 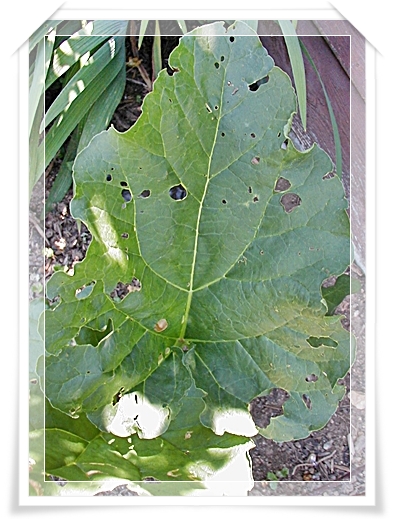 Why do they have holes? Aren’t rhubarb leaves suppose to be poison, so what would eat holes in them? Do they normally grow that way maybe?

I searched the web and even found insect spray to make from rhubarb leaves, so I wouldn’t think insects would be eating at them. Would they? I hope someone can help me.

Here is an insecticide recipe.

Rhubarb Insecticide: Boil up one pound of rhubarb leaves in a few pints of water for about 20 minutes, allow to cool, and then strain the liquid into a spray bottle. Add some dish detergent (not laundry detergent) and spray on leaves to kill bugs like aphids and spider mites.

The above taken from Insecticide Link

The first indications of Ascochyta leaf spot are numerous small yellowish-green areas on the upper surface of the leaves. Within a week of initial symptoms, the leaf tissue turns brown and dies resulting in angular spots. These spots have white centers surrounded by red zone and then a grayish-green zone. Often the dead tissue will drop out giving the leaves a shot-hole appearance which may be confused with insect feeding.

A second disease problem that has been common this year is anthracnose stalk rot. First indications of this disease are wilted leaves and large, water-soaked lesions on the stems. The lesions quickly enlarge and turn black. The stems may have a twisted appearance and the whole stem may collapse.

Both of these diseases can be controlled with good sanitation practices. Remove and dispose of infected tissue during the summer and after the first frost. In the case of Ascochyta leaf spot, stems with infected leaves may still be harvested and should be taken first whenever possible. Since both diseases overwinter in infected plant tissue, good sanitation practices should control most of the disease problems.

Found at Link on Rhubarb disease